Progressive Issues Forum: Economic Security for All - A Case for Universal Basic Income

People's Alliance hopes you'll join us for this conversation with Andy Stern, the former president of the Service Employees International Union (SEIU). During this conversation, Stern will share his vision of Universal Basic Income as a solution for economic insecurity and folks will have the opportunity to connect with community members for discussions about how these ideas apply to our work in Durham.

Advances in technology are creating the next economy and enabling us to make things/do things/connect with others in smarter, cheaper, faster, more effective ways. But the price of this progress has been a decoupling of the engine of prosperity from jobs that have been the means by which people have ascended to (and stayed in) the middle class.

The foundation of economic prosperity for all Americans, Stern believes, is a universal basic income. Stern explores this idea in his new book, Raising the Floor: How a Universal Basic Income Can Renew Our Economy and Rebuild the American Dream. The idea of a universal basic income for all Americans is controversial but American attitudes are shifting. Stern has been a game changer throughout his career, and his next goal is to create a movement that will force the political establishment to take action against something that many on both the right and the left believe is inevitable. Stern’s plan is bold, idealistic, and challenging—and its time has come.

CHILDCARE AVAILABLE (for children ages 2 and older): If you need childcare during this event, please email [email protected] to let us know the age(s) of your child(ren). 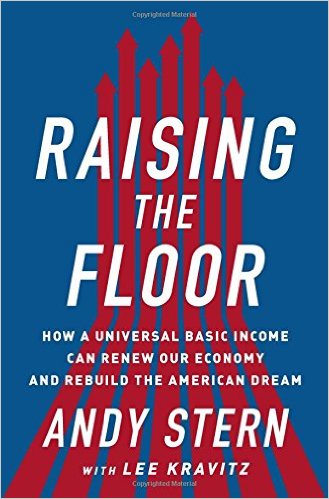 Please note that there will be a business meeting from 6:30-7:00pm to discuss and approve the 2017 Board slate and review and pass the 2017 budget.