On the 35th Anniversary of Durham’s Gay Pride/Recall Victory

On June 25, 1986, a flyer was distributed around Durham that read in bold print at the top of the page “JUSTICE FOR ALL” with only a thin black line separating the words “DON’T SIGN THE PETITION!” At the bottom of the page, it read “NO RECALL!”

Although the flyer announced Durham Citizens for Responsible Leadership as the ad-hoc coalition that mounted this campaign, the P.O. BOX and address were those of the People’s Alliance. This piece from the archives of the People’s Alliance shows the role that People’s Alliance played in one of the earliest and most important battles for gay and lesbian rights in the history of Durham, as I discussed with PA Board Member Mab Segrest this week.

“The old-timers of the Bull City know that this recall campaign was the most exciting event in the city’s gay and lesbian pride march that month,” Segrest remembered. “PA-backed mayor Wib Gulley signed an anti-discrimination proclamation in support of gay pride--something no other mayor would have considered before that time. To everyone’s surprise and dismay, fundamentalist ministers in both white and African American communities launched a petition campaign to recall him from office. Soon, tables sprung up all over Durham on street corners downtown, at the post offices, and the malls, within places of worship in an effort by the fundamentalists to garner the 14,000 names required to recall the mayor.”

As former Mayor Gulley remembers:  “It was such a poignant time for us all in Durham, responding to and then defeating a challenge to the progressive wave that was building in our community.  There are many memories for me … of the tables  friends set up next to the recall tables with petitions supporting the proclamation, of Joe Harvard reaching out to Rabbi Jon Friedman and Bishop Elroy for the first time to work together in public opposition to the recall, of the large Coca Cola truck driver who dropped a folded napkin at my table in Bullocks one day that said ‘Thanks for what you’re doing,’ and the older gray-haired woman in her pink Cadillac who slowed down next to me in downtown as I was walking and hollered out ‘we’re behind you, Mr. Mayor.’”

For the first time in North Carolina’s history, progressive communities in the city came together to support and defend their queer neighbors and defeat the petition drive. By the anointed date to turn in the petition, the anti-recall effort prevailed. That year's Pride march drew a large crowd of Durham allies to join their queer neighbors to celebrate our open presence in the city.

Segrest describes the feeling as wonderful and groundbreaking. Gulley was the first PA candidate to win a mayoral election, putting his political capital and PA’s capital on the line. He believed he would win and he was right. In his second run for mayor, he was elected by a strong majority. Although the recall campaign did not have the official status that a city council vote would bring, it signaled to the city, the county, and the state that a politician could take a pro-gay stance and keep getting elected.

Mab stated: “It is my belief that Wib’s stance paved the way for the broad inclusion of LGBTQ in the 1990 Senate race of Harvey Gantt vs. Jesse Helms. Also important in this entry of queer people into open participation into electoral politics, Mandy Carter directed the 1990 Senate Vote 90 to rally queer votes for the Gantt campaign. Joe Herzenberg and Lightning Brown in Orange County electoral politics were openly gay, and Joe went on the become the first openly gay elected official in North Carolina winning a seat on the Chapel Hill city council. “Given People’s Alliance's current advocacy for LGBTQ legal protection,” Segrest said, “I appreciate People’s Alliance and its continuing support of our rights and our lives.”  Wib Gulley observed: “So now those of us from those years are gray-haired, and I’d say it’s been a pretty good 35 years for the progressive movement in Durham.”

Segrest added:  “These thirty-five years later, as recently proposed legislation in the General Assembly makes clear, transgender people are the most vulnerable to physical assault and too restrictive laws and practices as Republican majorities in both chambers foment the worst politics of Jesse Helms.” 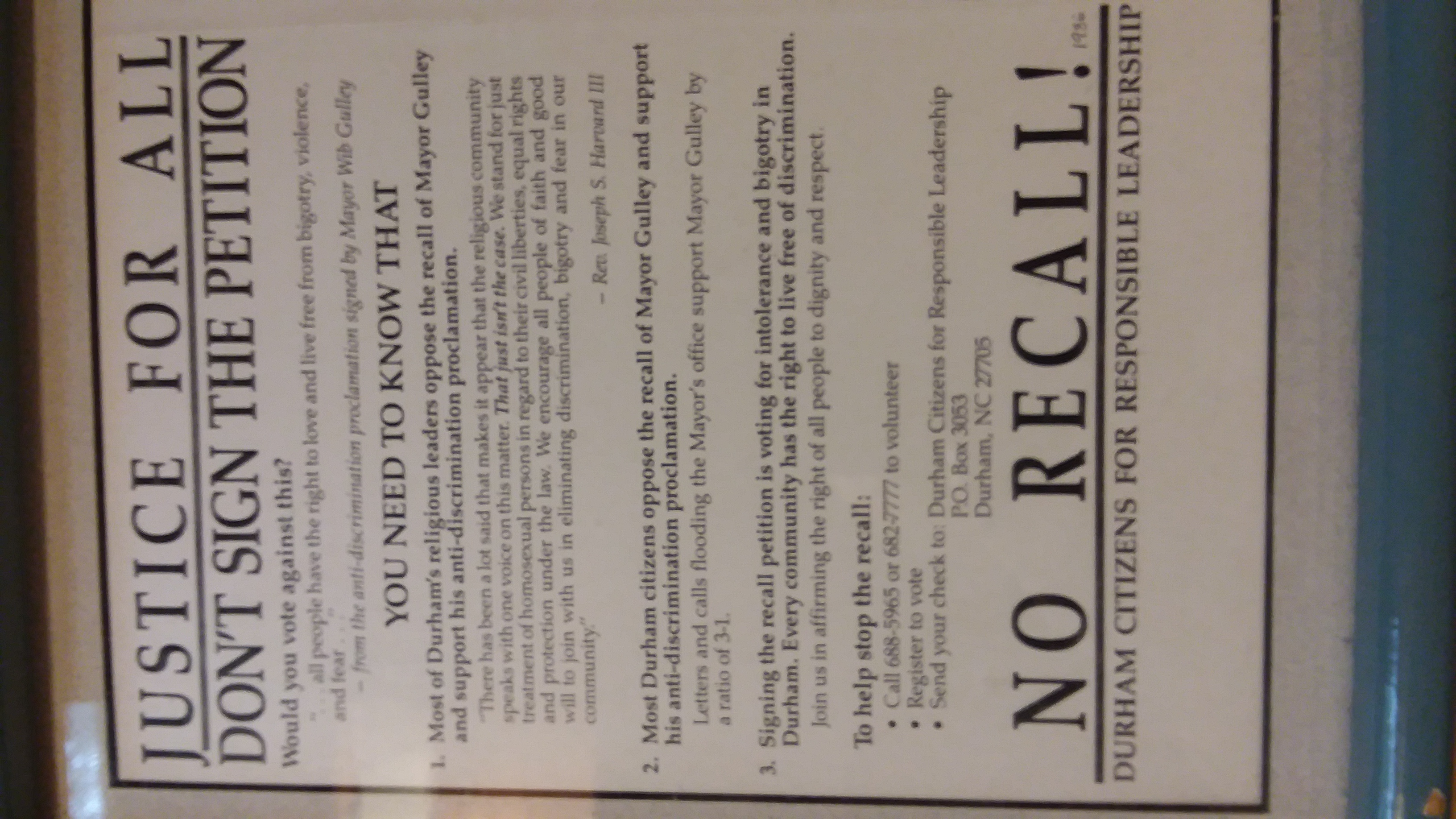