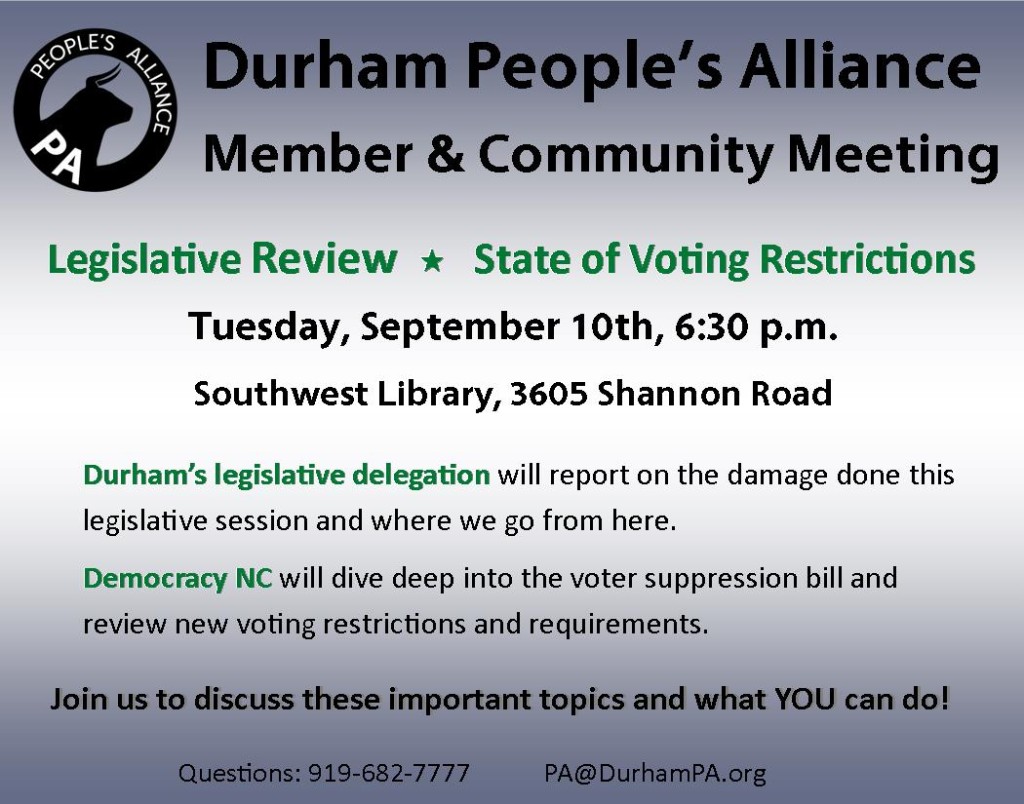 Durham’s legislative delegation will report on the damage done this legislative session and where we go from here.

Forward Together - Sign up For Rally in Chapel Hill August 28th

13 Rallies across the state in each Congressional District. Ride the bus from Durham to the Chapel Hill Rally!

Watch this powerful episode of the Rachel Maddow show featuring North Carolina. A must watch!


Watch this video - a call for all teachers and parents to STAND UP for education at this final Moral Monday protest. Be there on July 29th!

Watch this powerful video from July 22nd about the attacks on voting rights!

Unconditional: A Film Addressing Equal Rights for All Families

Join People’s Alliance for a documentary, discussion, and fundraiser. "Unconditional" features Sara Terry (current PA Co-President) and Julie Edmunds and their struggle to secure legal rights to their children. The film was shot during the 2012 campaign.

Followed by a panel discussion with the filmmakers, Kelly McKenna, Hanna Teachey and Rhonda Chan Soo, Sara Terry & Julie Edmunds, and Chris Brook, Legal Director of the NC ACLU. Chris Brook will discuss the latest developments in Fisher Borne v. Smith, the ACLU’s ongoing legal challenge to North Carolina’s ban on second parent adoptions and marriage for same sex couples, brought on behalf of six same-sex couples from across the state and their children.

NO TICKETS REQUIRED! Money raised online and AT THE DOOR (you can register and wait to donate at the event) will support technical work such as sound and color correction, as well as entrance fees and expenses associated with film festival entry. If enough money is raised, the film makers plan to develop an education kit to accompany film showings.

Presently, in North Carolina, families are being denied equal rights.

In 2012, a CNN poll showed that 60% of persons questioned reported having a family member or close friend who identified with being gay or lesbian. Attitudes towards homosexuality are changing. Yet, despite changing attitudes, state laws have failed to follow suit.

The documentary film, Unconditional, aims to raise awareness of the ways that current North Carolina laws harm the children and parents in same-sex families. While there are many films being made on gay rights, Unconditional is unique for several reasons.

The story of our other character in the film, “Catherine”, illustrates a very real, and worst-case scenario for same-sex parents. When Catherine’s partner moved out, she took their kids with her. ”Catherine” had no rights to see her children because she was not considered a legal parent. We will learn of her struggle to see her kids again.

Journey with us to learn more about the issues surrounding parental rights, to see how these families struggle with a lack of legal protection. See them rise up and fight to acquire these protections.

PLEASE REGISTER BELOW TO LET US KNOW YOU ARE COMING!

Donations can be made AT THE DOOR or online.

Posted on Blog by Kate Fellman · June 25, 2013 3:24 PM
In light of today's Supreme Court ruling, we need to be even more active in getting folks registered, educated and participating in our democracy!
The Durham Branch of the NAACP is sponsoring a non-partisan voter registration drive this Saturday, June 29th.

Participants are asked to meet at 9AM at Covenant Presbyterian Church at 2620 East Weaver Street. At that time we will complete a very brief training and then fan out across Durham to predetermined locations to register voters. Participants will then return to Covenant Presbyterian Church between 12 Noon and 1PM. Cold water and all necessary supplies will be provided.

All are welcome to join in this important exercise in local democracy. Co-sponsorship offers from other non-partisan organizations are warmly encouraged.

ALSO - Please sign up for a phone bank! They are happening across North Carolina!

The Durham People’s Alliance, Durham’s home of progressive community action, is searching for enthusiastic progressive candidates who want to work for social change in the Bull City!   The position requires 20+ hours of work per week, with potential to grow.  Candidates should have excellent administrative and organizational skills, proven communication abilities and a passion for social justice and progressive political ideas locally, regionally, and state-wide.  The duties of the staff position include:

In your cover letter or resume please describe:


People’s Alliance is looking for a multi-year commitment.  Salary and benefit information is available upon request.  The PA bylaws, mission statement and other information about the organization are available at www.durhampa.org.  Please send a resume including references, a writing sample and a cover letter that includes a discussion of the issue about which you are most passionate.  Send to Kate Fellman at [email protected].

We have been able to keep 751 South development at bay for years now, but all may be lost in one vote.

On June 3, next Monday, the Durham City Council will vote on whether to annex and supply utilities to 751 South.

If we lose, the fight will over and the bulldozers will move in.

Please take the time TODAY to email the Mayor and Council urging them to vote NO.

This document shows  the impact of the 751 South Development.

AMERICAN WINTER is a documentary feature film that follows the personal stories of eight families struggling in the wake of the worst economic crisis since the Great Depression. The film presents an intimate snapshot of the state of the economy as it is playing out in the lives of American families, and highlights the human impact of budget cuts to social services, a shrinking middle class, and the fracturing of the American Dream.

You spoke to us about your priorities, now it’s time to act.  PA leaders will talk about our highest priorities and provide members with specific actions you can take now to move our progressive agenda forward. RSVP on Facebook Event Here. 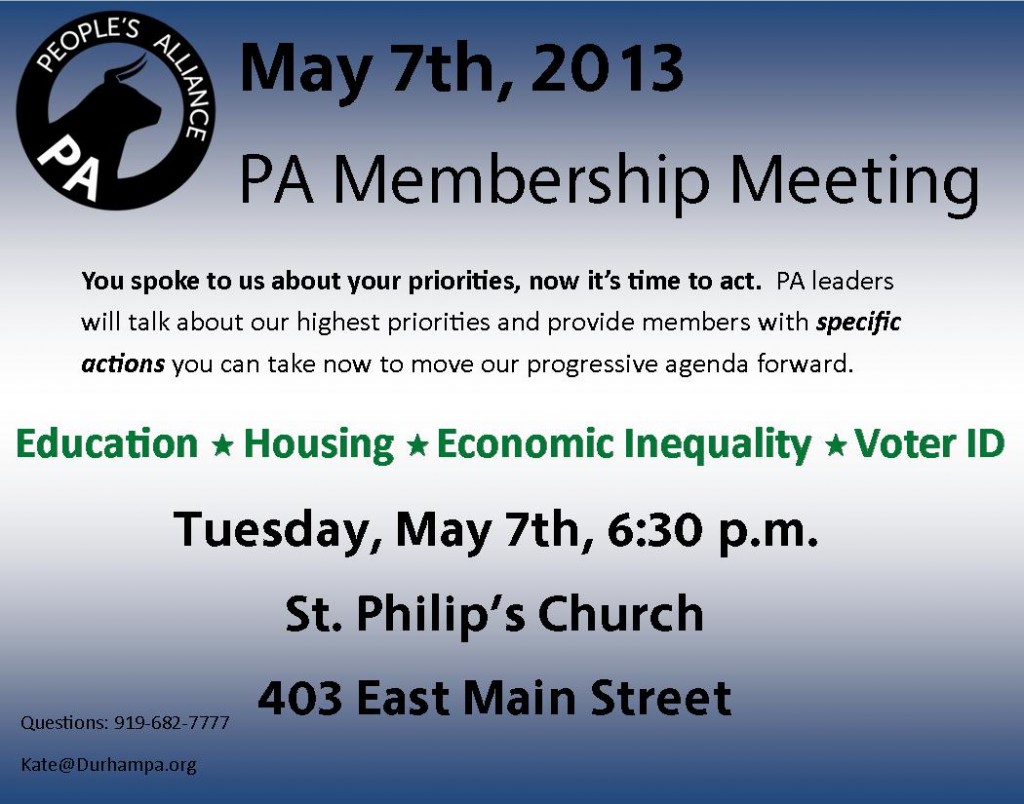