During this extremely tight budget year, our PA Education Committee has been working to maintain funding for our schools. Durham Public Schools  just announced three budget information sessions for the public. They will adopt the 2011-2012 budget at the final meeting May 12th. PA urges all who are concerned about maintaining funding for our schools to attend these public meetings.

Durham, NC - A budget information session will be held on Tuesday, April 12 at Holton Career and Resource Center. Staff will present important information about the budget process and the 2011-2012 Budget. The meeting will take place in the auditorium and begin at 6:30 p.m. Holton is located at 401 North Driver Street.

The Board of Education will hold a special meeting on Monday, May 2, 2011 at 6:30 p.m. in the Fuller Administration Building Board Room, 511 Cleveland Street, Durham, North Carolina. The purpose of the meeting is to receive public comment on the 2011-2012 Superintendent's Budget Proposal. A budget work session will be held following the public hearing.

Additionally, the Board of Education will hold a special meeting on Thursday, May 12, 2011, at 6:30 p.m. in the Fuller Administration Building Board Room, 511 Cleveland Street, Durham, North Carolina to adopt the 2011-2012 Board of Education Budget.

The PA Education Committee is holding a meeting to prepare for the May 2nd and May 12th public hearings on Monday April 25th, 7:00 p.m. at the PA office (1821 Green Street). If interested in joining this committee or the mailing list, please email the Education Chair.


Please take a moment to read the following article, written by Tom Miller, President of the Durham InterNeighborhood Council. Then please email and urge elected officials not to give in to the billboard companies.The City of Durham unanimously rejected Electronic Billboards in 2010 - there is no reason for the state to take away our local control!

Neighborhood advocates and neighborhood organizations all across the state are joining forces to oppose the billboard bills, S.B 183 and H.B. 309, now pending in the general assembly.  These identical bills would allow clear cutting of trees to "improve" billboard visibility and what's worse, the bills would wrest control of billboards from local government and allow as many as 7 billboards a mile along NC roads and highways - even in towns and cities!  The bills would allow billboard owners to put up digital billboards anyplace a regular billboard could go.  These are bad bills and we need to stop them.

The bills are due to be taken up in the house and senate transportation committees this week.  We need to write to the members of both committees and let them know we don't want the legislature in Raleigh ramming digital billboards down our throats.

The addresses of the committee members appear below.  Send each a brief, but unequivocal message to vote against these bills.  Send the same message to your own senators and representatives. 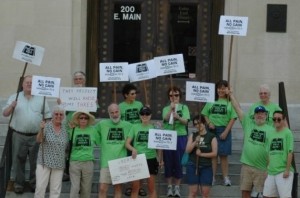 Then please email, call, or write the County Commissioners and cc the City Council: commissioners@durhamcountync.gov & Council@DurhamNC.Gov

We also have some other exciting ways to get involved with this issue here at PA. Please email Kate at durhampa@mindspring.com to find out more.

Posted on Blog by Kate Fellman · August 24, 2006 11:04 AM
Over ten years ago, the Triangle Transit Authority predicted that the Triangle will experience transportation problems that will “affect its livability and mobility, including a loss of community identity and open spaces, less efficient and high-cost transit services, increasing highway congestion and a lack of alternative transportation choices”.

Now that the Triangle has a population of 1.2 million people, an increase of 39% from 1990 to 2000, we cannot say that the TTA didn’t tell us so. Our community has an opportunity to be more mobile for more people. We also believe the citizenry has the responsibility for protecting the environment. The Durham People's Alliance strongly supports TTA’s efforts in bringing regional rail to the Triangle.