Wear Red for Education on Wednesday's! Celebrate teachers and public education. Buy a T-shirt! Get one for you and one for your favorite teacher!

Meet us at the Durham Farmer’s Market on Monday to take part in the next Moral Monday protest in Raleigh! Be there by 3:45, bus leaves at 4 p.m.!

For those who choose to petition the legislature through nonviolent civil disobedience, based on their own moral conscience, it is CRITICAL that you attend a briefing and information session beforehand at 3:00 pm.

Everyone else please meet us at Halifax Mall!

YOU DO NOT NEED TO ENGAGE IN CIVIL DISOBEDIENCE TO BE A PART OF MORAL MONDAYS!

“Since when did you get so political?” my dad asked as we pulled away from the airport. He was following my Facebook posts, pictures, and videos of my recent Moral Mondays participation through the Durham People’s Alliance. Each week they provide transportation to the rally using Greenway Transit, a Durham based eco-friendly bus service. We pile in, two by two, and plaster our protest signs onto the windows facing traffic. The People’s Alliance bus volunteer provides instructions, ensures each person has a buddy to check in with, and then takes attendance. Excited chatter fills the bus as each attendant shares what motivated them to attend the rally.

It’s true. I’m not the most political person in my social group. I don’t even watch the Daily Show or The Colbert Report like my politically zealot friends do; unless one of them posts a funny video on Facebook.

I guess I am a passive moderate. I vote. I have issues that matter to me and vote accordingly. But all in all, a politician is a politician. Why do people expect so much of them? I don’t. The Electoral College vs. popular vote process is not exactly fair. What can I do about it? I feel the responsibility to do my part but I don’t live and breathe politics like the junkies and lay pundits do.

I am relatively new to the area and my previous work in disaster planning, security, gender equality, and humanitarian aid, and organizational consulting required me to travel 100%.  While my friends back home in Durham track local and state issues regarding zoning, school board, taxes, and economic development, I watch and plan for impacts earthquakes, hurricanes and uprisings have on the vulnerable populations my non-profit organization, Mahila Partnership, serves. That is how our paths crossed.

Leading up to the vote to amend the North Carolina constitution which exclusively recognizes marriage between one man and woman as the only legal relationship, my human rights self, crossed paths with my political counterparts. Together we formed an alliance to encourage people to register to vote and vote against Amendment One. The political junkies knew the up to the minute data on precincts, voter turnout, what counties were lagging behind, and how Durham was leading the pack. I turned to my social network, artists, and do-gooder community to find someone on the other side, convince them to vote against the Amendment One, sing Grammy winning songwriter Laurelyn Dossett’s song “Vote Against Amendment One”, and show up to the polls.

All of those thoughts swirled in my head as I turned to answer my dad.   “I love North Carolina. The new governor and legislators are passing bills that are hurting the poor, unemployed, uninsured, retired, kids, and teachers.” I went on to tell him about the McGovernor rejecting federal funding for Medicaid. That doesn’t even make good stewardship sense. I reminded him that I was a benefactor of the extended unemployment payments benefits in 2008. 100,000 people will lose their extensions come July 1. Finally, I shared how this Assembly intends to change our voting procedures requiring IDs and rolling back to the traditional voting calendar. No more early voting. “Why?” he asked. Considering that there is no substantial GOP platform on voting issues, other than reducing fraud, I can only use data and logic. The data shows that it is young and older Democrats that overwhelmingly utilize the early voting system.   Looks like the political junkies are rubbing off on me.

I felt myself sorting it out as I shared with him how the General Assembly passed so many bad bills in just a few months and there are three more years. I can’t wait this out like I usually do and just vote for a better candidate. These are bad bills hurting people I have come to adopt as my community. This isn’t the state I was born in but it is the state I hope to retire and rest in. Durham is my home, now. Although most of the vulnerable people affected by these bills aren’t the biggest block of voters, that’s ok. I’ll find them, tell them what’s going on, ask them to register to vote, and ask them to join me as we bring others in.

Meet us at the Durham Farmer's Market on Monday to take part in the next Moral Monday protest in Raleigh! Be there by 3:45, bus leaves at 4 p.m.!

Cost is $10. We have SPONSORSHIPS for those who cannot afford that! Please don't let the cost keep you or others from riding. Pass along the sign up and get everyone on the bus!

THEN CLICK HERE TO TAKE MORE ACTION : help us register voters and protect our voting rights!

For those who choose to petition the legislature through nonviolent civil disobedience, based on their own moral conscience, it is CRITICAL that you attend a briefing and information session beforehand at 3:00 pm.

Everyone else please meet us at Halifax Mall!

YOU DO NOT NEED TO ENGAGE IN CIVIL DISOBEDIENCE TO BE A PART OF MORAL MONDAYS!

The past several weeks have not been kind to those of us who value voting and democracy. Legislators in the General Assembly have introduced bills that would slash early voting, eliminate Sunday voting, and get rid of same-day registration. This is in addition to extreme efforts to make it harder for college students to vote and the introduction of restrictive new voter ID requirements. In a time when North Carolina has some of the highest voter participation rates in the country, legislators are trying to make it harder to vote.

Fortunately, there are several ways that we can all respond to Save Early Voting and Protect Our Vote:

An on-line virtual phone bank is available for those who want to make calls from home. All that is needed is a cell phone, a computer and an internet connection. Scripts and caller information load automatically after a brief sign-in. Link http://bit.ly/ProtectOurVote_PhoneBank

PA is forming an action team to pull in partners and build a strong coalition to make sure the public is educated on new voter ID requirements, to ensure voter ID's are easy to obtain and to protect early voting.

Join us at our first community collaboration meeting as we come together and continue the grassroots work of our predecessors of ensuring the right to vote.

In the meantime, check out this Voter ID fact sheet and Respect our Vote document. Your letters to the editor are still needed!

Posted on Blog by Kate Fellman · November 26, 2012 6:54 AM
Durham People's Alliance wants to thank all those out there who aren't old enough to vote, but were old enough to Get Out the Vote and help mobilize people in and around Durham Against the Amendment and FOR our endorsed candidates.

Do you know kids who helped stuff envelopes, Ran With the Bulls with Race to the Ballot, pass out yard signs, work the polls, talk to friends about the elections (in both May and November)? Then they're invited.

We'll have pizza and drinks, face painting, DJ's and other fun planned. We want these kids to know that even though they cannot vote, there is work they can do to help build a progressive Durham, NC and USA! CLICK HERE TO RSVP AND SHARE ON FACEBOOK!

Join PA for Screening of "Gasland" 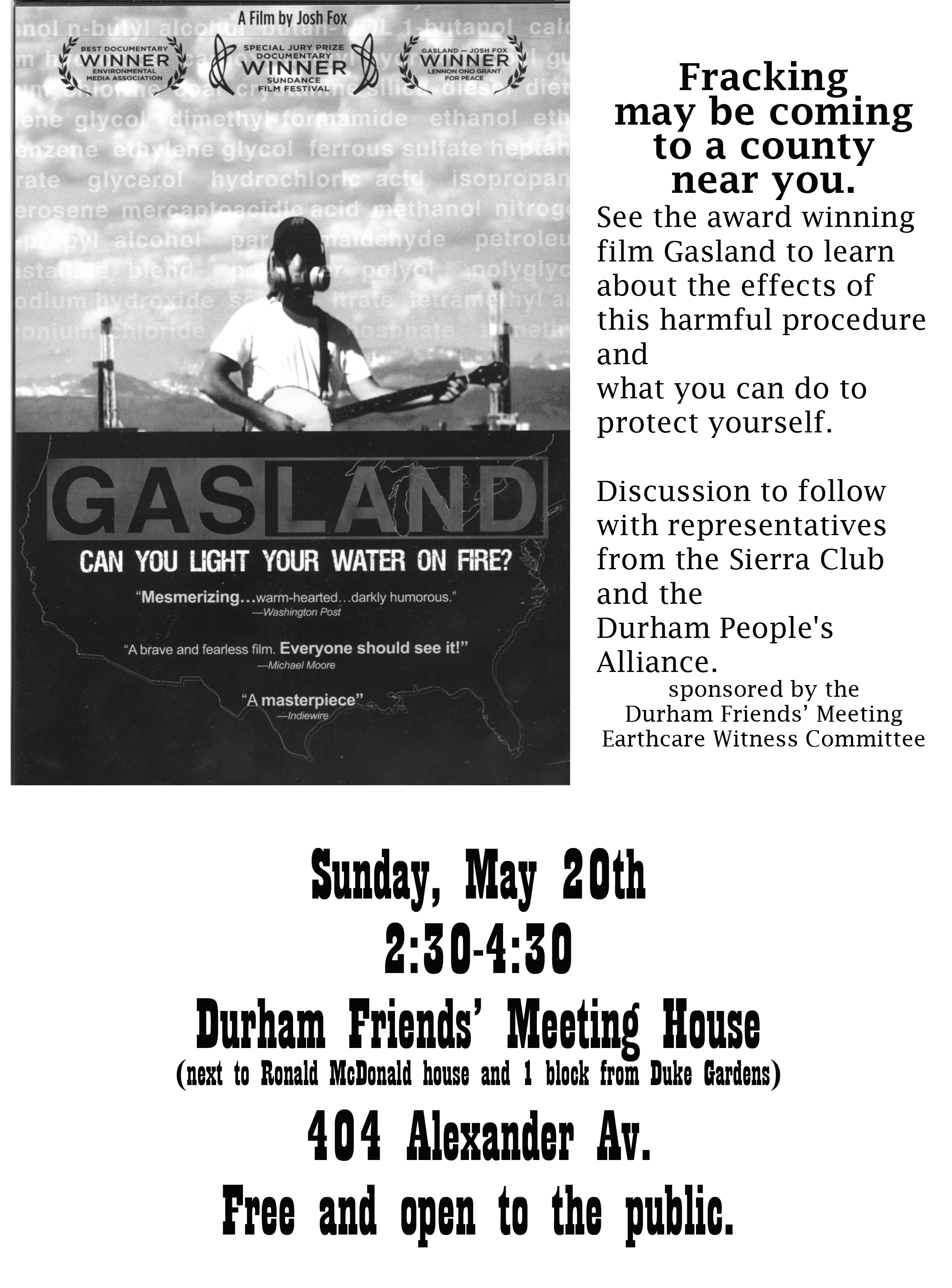 March To the Polls AGAINST and Party at Motorco 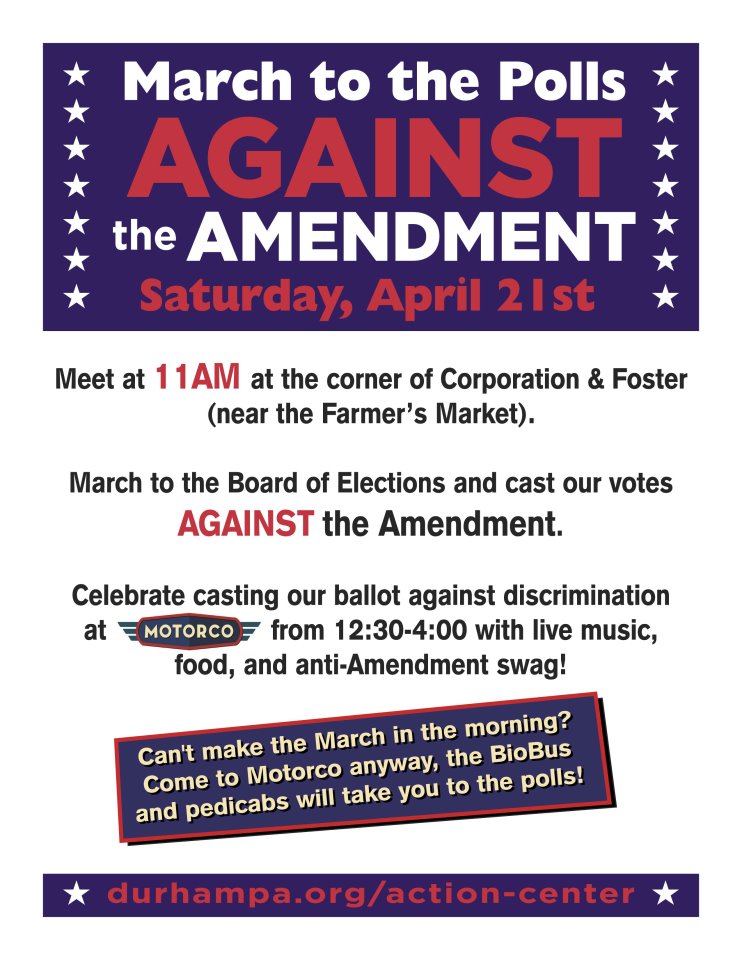 Join us at Motorco, starting at 12:30 for great music, anti-Amendment swag, and rides to the polls to early voting.

Here is the music line-up:

Join us at 11:00 at the corner of Corporation and Foster to march to the polls before coming to Motorco!